The Podcast Database Wiki
Register
Don't have an account?
Sign In
Advertisement
in: YouTuber Podcasts, Society & Culture Podcasts, Podcasts in English, Podcasts from the United States 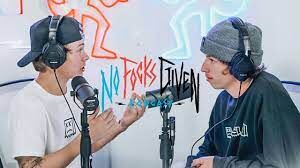 No Focks Given is a currently active podcast started in 2021 by YouTuber friends Tanner Fox and Maverick Leonard in California. It concentrates on the active youth lifestyle and features people they know from the social media influencer, action sport, automotive, and entertainment spheres.

Maverick Leonard has also been on YouTube for some time. He as well has a background in freestyle scootering and fishing and has frequently traveled to Japan. Mav is active in drifting and owns a few cars modified for that sport. Maverick relocated to to Texas in October of 2021 to be close to his girlfriend and pursue other opportunities.

About once a week, Tanner and Maverick will interview their guest for an hour or more. Alternatively, they will engage each other in insightful conversation about current events in their lives and their world if no guest is booked or ready. The Spotify and iTunes versions of each episode, though supplying only audio, will often feature additional content not disclosed on YouTube.

On the podcast #30 of May 31, 2021 Tanner announced a paid club offering premium content supplemental to that carried on his other social media channels, to be launched the following day. Go to https://www.nofocksclub.com/ for costs and further details.

Tanner says that he wanted to name his program No Fox Given but ran into problems from The Walt Disney Company, which had earlier bought Fox Studios from Rupert Murdoch and had taken out a copyright on all uses of the word "Fox" for media projects of any sort. Tanner gave no focks over the matter, so that's how he selected that name.

Link to the podcast[]

Community content is available under CC-BY-SA unless otherwise noted.
Advertisement